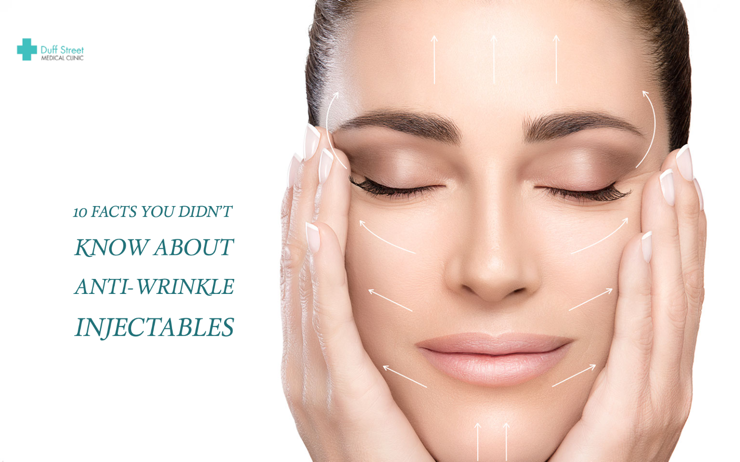 With more and more celebrities revealing they have used anti-wrinkle injectables, they have definitely become the popular choice to look younger and youthful.

If you’re considering anti-wrinkle injectables to help improve your appearances too and remove those age lines and wrinkles, then you might be interested in knowing more about them.

So, before you visit a cosmetic clinic, we have put together 10 facts you didn’t know about anti-wrinkle injectables.

Anti-wrinkle injectables are a form of diluted and purified protein. It is a type of medication that is administered into the muscles under the skin, usually in the forehead or crow feet’s creases to help relax the muscles and smoothen the age lines.

2) It tells the brain to stop the facial creases

Wrinkles are caused due to the natural contracting of the facial muscles, and over time, they become ingrained into your skin, forming lines and wrinkles. So, when injectables are administered, the protein helps to stop the signal between the nerve and the muscles. This tells the muscles to stop contracting, thereby halting those wrinkles.

3) Anti-wrinkle injectables don’t last the same for everyone

The injectables don’t last the same for everyone. The protein dissolves over time and needs to be re-administered for continuing effect. Its longevity depends on many factors and tends to dissolve quicker in patients who live a more active life than the rest.

Anti-wrinkle injectables work to remove or smoothen crow’s feet, frown lines or even a pebbly chin, but when applied correctly, it will never interfere with your facial expressions.

This is because they’re not applied to your facial muscles, so the sensory nerves are never affected. You can feel all of your expressions just as how you would feel before the injectables, only this time without those lines.

Because of its paralysing effect, anti-wrinkle injectables have been historically used for medical purposes such as for the management and treatment of migraines, bruxism, facial twitches, cerebral palsy in children as well as movement disorders in adults.

6) They are painless, but with just a slight pinch

Since very fine needles are used, the procedure is painless. However, you might occasionally feel a little pinching, which lasts no longer than few seconds, once the needles are removed.

7) Anti-wrinkle injectables are not only for women

More than ever, men are also finding it commonplace in using anti-wrinkle injectables to get rid of age lines. The only difference is that the amount of medication used for men is higher than women, and they’re more interested to smoothen the lines, rather than getting completely rid of them.

8) You won’t see the difference immediately

It usually takes around 5 to 14 days to see the difference. This is because the medication will need time to find its way to every nerve and then for it to block them individually. And as it continues to block more and more nerves, the result gradually becomes noticeable.

Even though anti-wrinkle injectables work to get rid of the age lines, it never leaves your face frozen or immobile. Unless you want them frozen, in which case it can be done too.

10) The treatment is temporary, so you can experiment

Anti-wrinkle injectables give temporary results, and it might be the best choice as it gives the control on how you want to look.